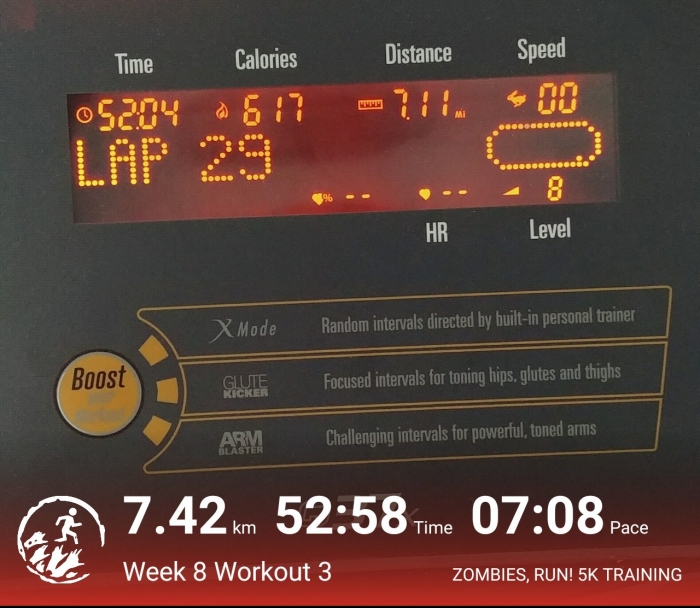 On Friday, I completed my last training mission for the Android version of the Zombies, Run!  5K Training app by Six to Start.  While this is supposed to be an 8-week training program, I’ve been at it since mid-October.  Having completed the program, I wanted to give some of my thoughts on the experience.

Overall, I loved it!

Imagine taking an audiobook about a zombie outbreak, and attaching a step-counter/GPS tracker to it.  That’s what the app is at its core.

You play the silent hero, Runner 5.  The adventure opens with you in a helicopter bound for the Town of Able.  While en route, your helicopter is shot out of the sky, and you are forced to make your way to the settlement with the help of Able’s radio operator, Sam.  Once you make it to town, you meet a diverse cast of characters who you “interact” with throughout the 8-week plan.

The bulk of your interactions take place with Sam and Maxine, the town’s doctor, who also serves as your training coach while you build stamina and prepare to take your place as one of the town’s Runners.  The Runners are a group of people who are sent out on missions outside the guarded walls of town to run messages, look for survivors, gather supplies, and occasionally serve as decoy bait to lure zombies away.

While managing a zombie outbreak is bad enough, you still have the lingering question of who would shoot down a helicopter from the middle of the zombie-infested countryside, and more urgently, who is stealing supplies from the town’s quartermaster.

I found the story very immersive.  It brought me back to my old radio drama days from high school, with well-acted characters and sound effects to help you believe that you are being chased by zombies.  The creators took time to ensure the voice acting was well-done as you rely on the characters to help you experience the story.  There is no narrator telling you a story, but instead the story unfolds around you while you run.

Despite the fact that this is a training app, there is a surprising amount of story given to you.  You learn a bit of the backstory of the main players, and there is a lot of world building going on about life and the history of the zombie outbreak.  You learn a little bit about the politics of the various surrounding towns, and you get swept up in the human drama.  Indeed, your final mission is not just a 5k run, but a race against the clock to make a critical delivery to someone you’ll never meet but means the world to a close companion of yours.

I found the app easy to use and well-designed.  As I mentioned above, the app is basically an audiobook and a step-counter.  There is a bit more to it, but those are just extras that help with customization.  The app tracks your progress in one of three ways – a GPS tracker that lays out your run via a Google Maps integration, a step-counter if you want to use a treadmill, and an estimated distance tracker for use on rowing machines and ellipticals (how many minutes it takes you to go 1-kilometre).  I chose to use the step-counter feature despite using an elliptical, which meant my in-app distances were skewed, however I corrected the distances with the tracking done by the elliptical itself.  I also used my Fitbit to track caloric expenditure and heart rate, since they were calibrated to my height and weight.

The best part about the app is that you can choose to use an external audio player when the app isn’t talking to you.  I used both Stitcher and Spotify and found that the integrations were smooth.  This allows you to listen to music on the run.  When the training app needs to deliver information to you, it pauses what you are listening to and continues the story, before switching back to your preferred audio.  Even taking phone calls mid-app worked well.  There was only one time where my music didn’t start back up after I took a phone call.

One note of caution is that the first 3 or so weeks of the app are free to use, but you need to pay a nominal fee ($5.49) to unlock the rest of the missions.  While this might be annoying, or a bit of a barrier for people, I liked it because a.) I’m in favour of companies making money off of users to keep creating good content; and b.) letting you use the app for free lets you test it out.  By the time I was ready for week 4, I wanted to find out what happens next, and I thought a buy-in of around $5 was worth it to continue on the adventure.  The full (non-training) app uses a subscription model, but still allows you to trying things out before you need to unlock the full app.

I found the 8-week program to be a little easy for me, but using an elliptical meant that there was only so much crossover I would experience.  If I were to have tried running, I suspect the app’s difficulty would have been scaled more appropriately to me (and my knees would have taken a beating).  But the main purpose of the training is similar to most other “couch to 5K” training programs – get you moving a couple days per week while the difficulty is slowly ramped up.  I appreciate this approach, as it is enough to challenge you, but easy enough to keep you coming back for more.

To keep the difficulty scaled for me, I would often run through rest breaks, and I ensured that I kept the resistance level at a good place to maintain a heart rate of around 140bpm.  To ensure I was running fast enough, I monitored the elliptical’s RPMs, and used the following markers:

Before each mission, you can review what the day’s exercise routine will look like.  The training sessions involve a combination of walking and running periods, and some sort of ancillary movement to develop your leg muscles, such as knee-ups, skipping, and body-weight squats.  Some days are straight training, where you get little story development, but learn more about the people you are interacting with.  However, some training days morph into mini missions where you need to divert due to zombies or pick up critical supplies nearby.  One time, you even risk you life to help a downed runner in the field.  This is probably what kept me so engaged.  If it were just a disembodied voice telling me when to walk and run, I doubt I would find it very engaging and would have likely lost interest quickly.  However, because the training prompts are integrated into a narrative, and the characters are cheering your development on (because you are expected to take you place as a member of the community), it breaks the monotony of running up into more interesting chunks.

I’m not entirely sure to what degree I improved my cardiovascular health.  Because I didn’t feel like I struggled with the difficulty, it’s hard to measure my progress.  The best I can estimate is that my running distances did increase over time, even if you were to control for the duration of walking in the training cycles and the differences in run duration from week to week.  Despite having not measured with any amount of accuracy what my abilities were pre-Zombies, I’m fairly confident that I am in a better state of cardiovascular health having completed the training program.

If I have one complaint, it’s that the narrative move from the training app to the full app ends up restarting the story a bit.  The first mission in both the training app and the full app is  the same, meaning your story doesn’t really continue after the training app.  I suspect that once you start running the story missions, things will feel more integrated, but I was a little sad to have to “meet” Sam and Maxine for the first time again after having “developed” a relationship with them while I trained.  This is a relatively small nitpick on my part because narrative and story are important to me, but it’s not something that takes away from the experience.

I have already recommended the app to friends of mine, and I officially recommend it here.  I got well more than $5 in value from the app’s minor cost.  This is a well-made app that is easy to use, and integrates well into my exercise routine.  It makes exercise fun and engaging and the story is compelling enough to keep me coming back for more punishment.  If you are looking for a way to help you commit to a cardio routine, but you are starting off from scratch, this is a great option if you don’t mind running from zombies.